Skip to content
I've been covering video conferencing since before we called it video conferencing. It has been an exciting and somewhat painful technology to watch because it seemed like everyone in the segment fundamentally didn't understand that if you don't have interoperability and didn't focus on ease of use, it wouldn't work. Let's talk this week about why Microsoft Teams is trending to be the new standard for video collaboration. <a href="http://www.technewsworld.com/story/86761.html?rss=1">Source Tech News World</a>

It has been an exciting and somewhat painful technology to watch because it seemed like everyone in the segment fundamentally didn’t understand that if you don’t have interoperability and didn’t focus on ease of use, it wouldn’t work.

I mean, we seemed to grasp that telephones had to work with each other, and video conferencing was a phone with video. But for some screwy reason, the companies that brought the technology to market seemed to think that if you didn’t interoperate, you could make more money. Some of those old systems cost as much as US$250K to install and over $10K per month to keep running, even though they were relatively rarely used because they didn’t fricken interoperate. Meaning, Vendor A’s system wouldn’t work with Vendor B’s offering.

Fortunately that changed before the outbreak of COVID-19 as we moved to software clients that could run on smartphones and PCs. We still don’t have interoperability, but at least we don’t have to buy expensive hardware with limited use.

There was an early start for Zoom because it was the easiest to use, but then we discovered Zoombombing, and suddenly we remembered that security is a thing we need to factor into our decisions.

Now, I do a lot of calls with vendors, and initially they were on a variety of programs like Linksys, Zoom, WebEx, etc. But recently the Zoom calls have dropped off a cliff. ON24 has become the noticeable audience favorite for significant events; and Cisco’s WebEx seems to have taken over healthcare and some government. Still, Microsoft Teams has come out of left field to pretty much cover everything else.

Let’s talk this week about why Microsoft Teams is trending to be the new standard for video collaboration — and we’ll close with my product of the week: a new workstation from Lenovo that pretty much obsolesces every other workstation in the market.

As I mentioned above, I’ve been covering this segment for decades. One of my favorite stories is that we did a vast video conferencing test in the late ’80s at Apple; only to find that employees took their Apple hats and placed them over the cameras because they thought their managers were spying on them.

The goal was to build the technology into PBX systems and, had we been successful, we likely could have prevented the following decade’s mistakes. This test was back when the solutions were tied to phone systems. AT&T was backing the effort so that interoperability would have been a given. But the trial determined that employees were too distrusting of the technology. Then, a few years later the bottom fell out of the PBX market, killing the effort anyway.

Ironically, the PBX market (PBX stands for Private Branch Exchange and refers to the phone systems deployed in companies) failed because the products were so good that people never wanted to replace them. Like most technology markets, the market lived and died on churn (people replacing old products with new), but we’d done too right of a job with the initial offerings which were very reliable and, without video, didn’t need advancements.

The market walked away from its most significant future advancement and died.

But what we did learn was that the technology had to be affordable, had to interoperate as a phone did, and it had to be as easy to use as a phone. Ironically, the video conferencing systems that came out after that were extremely expensive, didn’t interoperate at all, and required someone who was specially trained to operate it.

Let’s fast forward to recently where we can use our PCs, tablets, and smartphones to use the apps. Now, these apps were often free initially, easy to learn, and a good alternative if you couldn’t make an in-person meeting. But people still preferred in-person meetings, so the apps weren’t used by default.

Then the pandemic hit, and lives changed. Suddenly, these apps were how we did meetings, held classes, and collaborated. No longer could we look over the cubicle walls and call a meeting. We needed the apps to get stuff done, and they were not ready. Mainly they weren’t ready to scale to significant events.

One of the easiest to use, Zoom, was also the least secure, and Zoombombing became a thing. Linksys, in particular, which had been acquired by Microsoft, really sucked.

The search was on for something that could scale, was secure yet was still easy to use, and could integrate with our other collaboration tools, which remained mostly Microsoft Office, now called Microsoft 365.

Microsoft Teams: Clicking All the Boxes

Teams entered the market from left field with Outlook and Microsoft 365 integration, many of the features people liked about Zoom (like virtual backgrounds), none of the performance and reliability problems that Linksys was having, and it was surprisingly easy to use. For the most part, Teams just worked.

They initially clicked all the boxes but one, and that is, it didn’t seem to scale very well to large numbers. So ON24 held the high end, but Microsoft Teams appeared to be going almost everyplace else. But ON24 has limitations in that it is a broadcast platform, not a bi-directional collaboration platform. Hence, events where there are questions, as opposed to just streamed content, tend to be pretty ugly, and the speaker gets no sense of the audience, which reduces the quality of their performance.

To address this, Microsoft introduced Together Mode, which converts the audience from a set of small video images into a more familiar audience environment. This advancement won’t just help speakers at large events, and make attendees feel more like they are in an audience, but it should eventually work with virtual reality to create a more in-person-like event at scale.

I think this is a huge game-changer and should allow Microsoft Teams to scale to the needs of the enterprise and education, entirely providing Microsoft with the inside track to become the de facto business video collaboration standard.

Looking back, it has taken 30 years for the industry to come up with a genuinely viable and scalable video conferencing product. I find it fascinating that the company that made DOS, Windows, and Office standards now has the best chance to rule the critical video collaboration space.

What helps a great deal, of course, is the integration with Outlook and Office — but it’s also the willingness to see what is wrong with existing offerings and fix those problems rather than emulate them.

Microsoft Teams now comes the closest, in my opinion, to what an ideal video collaboration product should be. Now it isn’t perfect; other advancements could change the landscape and the competitive mix, but when Microsoft executes, it’s tough to catch them from behind. They are executing well here and could end up owning this segment.

Given that many if not most of us will be working and learning from home for the foreseeable future, having a great video collaboration tool to keep us productive is undoubtedly a good thing.

One of my first jobs as an analyst was covering the workstation market, and I learned a lot. My big takeaway was that engineers specify their hardware and companies will generally buy them what they think they need.

This unique situation is because their output directly relates to the firm’s bottom line because engineers develop the products, work on correcting product faults, evolve products, and without products, companies don’t have anything to sell — and engineers LOVE performance.

When AMD announced Threadripper, their over-the-top processor with a massive number of cores, they announced it for the enthusiast space. I loved the product but thought someone had missed a meeting because most games didn’t make good use of the CPU anymore and were mostly gated by graphics. But a ton of engineering applications were gated by the CPU, and companies could afford far more expensive systems than most individuals would be willing to buy.

So, while I was personally excited to get my Threadripper desktop (which I’m using to write this column), I felt strongly that the more significant opportunity was a market that needed the performance more — and was more than willing to pay for it.

Well, Lenovo stepped up this month with their P620 Workstation and it is fantastic. It uses a custom version of the Threadripper processor jointly developed by Lenovo and AMD. One of the things that sets AMD apart is their willingness to do custom versions of their products. This custom version is critical to the workstation segment because of the unique security and accuracy requirements that engineers have that aren’t needed in enthusiast offerings. 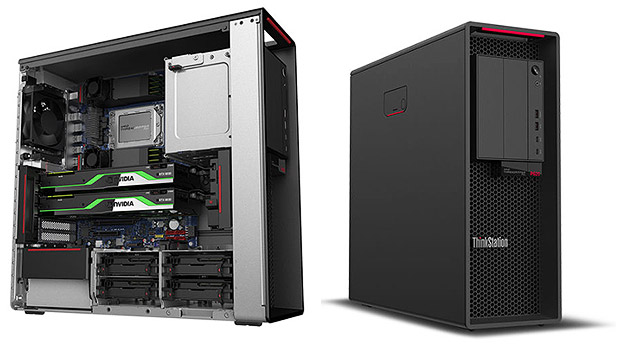 Lenovo is the fastest growing workstation vendor in the world, and its success is tied to a sharp focus on customer needs, industry-leading reliability, focus, and a willingness to implement emerging technologies like this unique Threadripper part. The result is a workstation that outperforms its dual-socket (twin processor) peers with a single Threadripper — making it both a value and a performance leader.

When I first was briefed, I concluded I could now die happy, and then my wife reminded me of the COVID-19 risk, so I rephrased my response because I didn’t want “to die” to sound like a request. While this product has a decent shot of being my product of the year, until then, the Lenovo P620 Workstation is my product of the week — and the month.