The power of the press has now played a role in providing clarity in the 135-pound division.

As previously reported by BoxingScene.com, Ghana’s Emmanuel Tagoe (31-1, 15KOs) and his team are taking steps to ensure the perennial Top 10 lightweight contender is granted no less than a title eliminator for his next fight. The 31-year old is currently ranked number three with the World Boxing Organization (WBO) ratings, which has been without a mandatory contender for nearly two years.

Shortly after representatives from the Puerto Rico-based sanctioning body scanned their favorite website, came the decision to rectify the matter.

“WBO will be considering designation for the mandatory challenger [at lightweight],”Francisco ‘Paco’ Valcárcel, president of the WBO announced on Friday. “[F]irst 2 or 4 [available] contenders could participate in an elimination bout.” 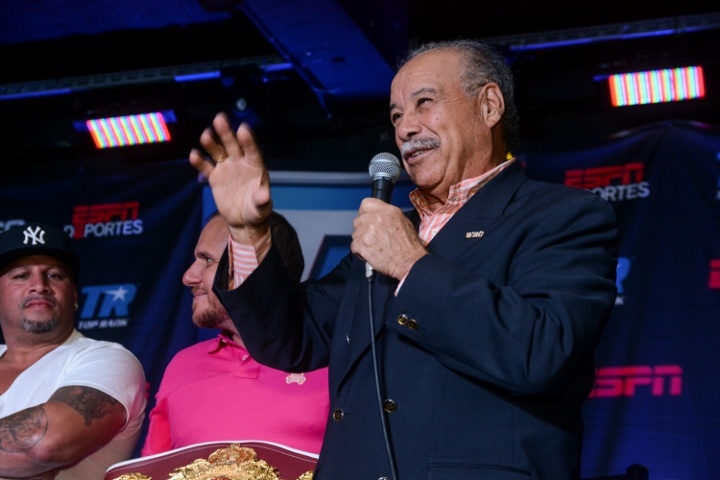 Wales’ Selby (28-2, 9KOs) is contractually bound to a title eliminator with another sanctioning body, as his IBF-ordered clash with Australia’s George Kambosos, Jr. (18-0, 10KOs) is due to take place October 3 in Selby’s Cardiff hometown.

García was named in an interim title fight ordered by the World Boxing Council, calling for the Victorville, California native to enter negotiations with England’s Luke Campbell. Such talks have not yet begun, with BoxingScene.com learning that García—who is coming off of a 1st round knockout of former two-time title challenger Francisco Fonseca this past February—is interested in exploring a possible fight with Tagoe.

In the event he sticks with plans for a clash with Campbell, the WBO would move on to a title eliminator between Tagoe and Ukraine’s Denis Berinchyk (13-0, 7KOs), who is promoted by Alex Krassyuk’s K2 Promotions-Ukraine.

The current WBO lightweight champion is Vasiliy Lomachenko (14-1, 10KOs), who is also the WBA titlist and is awaiting a confirmed date for a unification clash versus IBF titlist Teofimo Lopez (15-0, 12KOs). The bout is being eyed for a tentative date of September 19, while García has been aligned with a potential DAZN headliner in October, whether versus Campbell for the WBC interim title or Tagoe for a WBO eliminator.

Lomachenko won the WBO title in a 12-round win over Puerto Rico’s Jose Pedraza (27-3, 13KOs) in their WBA/WBO unification bout in December 2018. Pedraza won the WBO belt four months prior, dethroning Raymundo Beltran in an August 2018 fight which satisfied the terms of the sanctioning mandatory title obligations.