“I’ve been hearing a lot about that,” laughs Vito Mielnicki Jr. when asked about his Tweet on July 23.

Don’t worry, it’s no scandal, no controversial remarks from the 18-year-old. Instead, the welterweight prospect took issue with his segment of an ESPN.com article listing boxing’s top 25 fighters under 25. Mielnicki made the cut, coming in at number 24, and ESPN’s Steve Kim, who can be brutally honest in his assessments of rising starts in the sport, was complimentary of the recent high school graduate. But one phrase stuck in Mielnicki’s craw.

“I’m gonna be honest with you, right after I read that whole article, I went on a five-mile run at 11 o’clock at night,” laughed Mielnicki. “It was motivation for me. Those words just didn’t sit well with me, I guess.”

“I’m way more than a ticket seller. We can readdress where we all stand in 2 years.”

Again, it wasn’t an insult to the teenager, and an action fighter with a Polish / Italian background is going to sell tickets but, at the same time, throughout recent history, getting tagged as a ticket seller meant that a fighter was going to do well locally, but maybe not get to the championship or pound-for-pound list level.

Mielnicki is not having any of that talk. Not now, not ever.

“I’m never satisfied,” he said. “Whatever I do, I’m gonna do it a hundred fifty percent. I was raised like that. If I’m gonna do something, do it to the fullest and always be hungry. If you’re not hungry in this sport, it’s very hard to succeed. I look at it as if that guy’s walking into the ring hungrier than me or if  someone in my weight class is hungrier than me, then when they get into that ring, they’re gonna want it more than me and they’re gonna want to succeed more than me. But that’s never gonna happen because I was born with that hunger and that strive for greatness mentality.”

If he was born with it, he’s been using it for most of his life, putting the gloves on at the age of seven and chasing glory ever since. After a stellar amateur career, he’s 6-0 with four knockouts as a pro, and while making that ESPN list is a feather in his cap, more impressive is that he hasn’t lost a round yet, most recently knocking out 3-1 Chris Rollins in Los Angeles on August 8. 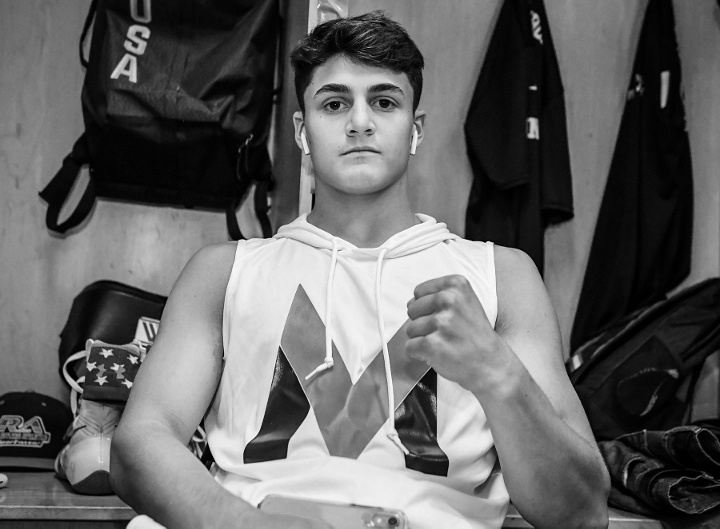 The victory came a day short of a month after his graduation from West Essex High School. It wasn’t the usual graduation day in the COVID-19 age, nor did Mielnicki have the usual senior year, but then again, he’s been living a different life from his peers since he was in grammar school.

“I’ve been sacrificing times like that since I was a kid,” he said. “Even when I was eight years old going to tournaments and missing my friends’ birthdays, missing school concerts and all those events, not having the real high school end of the year stuff going on, it helped me take it in as the norm for me. It’s not like I hadn’t missed anything like that in the past. And on the other hand, when I miss events, I don’t even take it as sacrifices because I’m doing what I love. I can’t consider it a sacrifice if I’m actually doing what I want to do.”

And now, while his friends face an uncertain future of virtual college classes and a brutalized job market, Mielnicki is pretty secure in what is now his full-time day job.

“Since I was a kid, seven years old, I’ve always wanted to just have boxing be my main focus and all I had to worry about,” he said. “And right now, now that I graduated from high school, that’s all I’m worried about. That’s my job now, a full-time job. All the kids are going to college or getting a job; this is what I’m doing and I couldn’t be happier.”

Don’t equate happiness with being comfortable, though. Mielnicki has walked through everyone in his path so far, but he’s well aware that one day there will be that opponent across from him that just won’t go away. So while he’s perfect as a pro, he’s not thinking he’s invincible.

“People get to a point where they think they’re invincible and they don’t work as hard as they did their first fight or they don’t work as hard as when they didn’t have a dollar in the bank and now they have money to lean on,” he said. “Me growing up as a kid, I was always a hard worker. Even when I used to play football, if there was 10 seconds left in the fourth quarter and we were up by 35 points, I’m still gonna come across the middle and stick you as hard as I could at safety. I’m not finished until that last whistle sounds. So until I reach the point where I’m good in this sport, like there’s no stopping me, I’m always gonna work as hard as I did since Day One.”

But so far, so good, right?

“It’s been going really smooth, but I know there’s gonna come a time where adversity’s gonna hit and you’re just gonna have to bite down and adjust and adapt,” he said. “When I was in Vegas for some amateur tournaments and then for my fights at the MGM Grand, as soon as you walk into Floyd Mayweather’s gym, the first thing it says on the side of the wall is “A true champion can adapt to anything.” Whenever that time does come where a curveball is thrown at me, I’ll be able to adapt and adjust and bite down.”

As for that ESPN article, Mielnicki and Kim are on good terms, with an asterisk.

“It’s all love,” said Mielnicki. “But we’ll re-address the list in two years.”