Skip to content
Consumer interest in cloud gaming could boost annual subscription revenues to nearly US$3 billion, according to consumer research firm Parks Associates. There is renewed interest, the research firm's report noted, in gaming services that can stream over the Internet and deliver games to multiple platforms without downloads and without taxing local processing power. <a href="http://www.technewsworld.com/story/86768.html?rss=1">Source Tech News World</a>

According to Parks Associates, 30 percent of U.S. broadband households say they’re interested in services that can deliver a Netflix experience for gaming. There is renewed interest, the research firm’s report noted, in gaming services that can stream over the Internet and deliver games to multiple platforms without downloads and without taxing local processing power.

It estimated that — based on consumer interest in cloud gaming services — the U.S. cloud gaming market stands to generate nearly $3 billion in annual subscription revenue, with the opportunity to generate more revenue via service stacking and add-on sales, provided they’re designed and targeted correctly.

“What makes cloud gaming unique is it’s one service that you can access on multiple platforms,” explained the author of the report, Senior Analyst Kristen Hanich.

“You can access a game on different devices without being tied to a single platform,” she told TechNewsWorld.

The report, based on a survey of more than 10,000 U.S. broadband households, found that almost three quarters of them (74 percent) play video games for at least one hour a week. 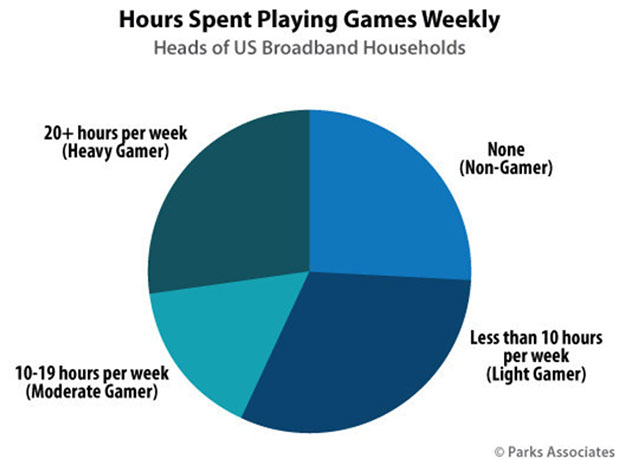 “A lot of people were stuck indoors, they were looking for solutions, most of them already have a computer so why not use it to play games?” Hanich explained.

“The are lots of online stores that you can download a game from and start playing on your computer,” she said.

“AMD has expanded their presence with much more affordable, high performance CPUs and graphics cards in this space,” he told TechNewsWorld.

“In addition,” he continued, “there is still a perception with some users that the PC is still the best platform and produces the most immersive gaming experience.”

An overall increase in PC purchases during the pandemic may have also benefited PC game sales, Vena observed.

“Laptops continue to be growing as a more affordable platform for PC gaming, as they’ve grown in power and performance,” he noted.

While PC gaming increased, Parks found that console gaming declined during the same period, to 28 percent from 31 percent.

A major driver of console game sales are blockbuster titles. That pipeline, though, seems to have dried up.

“There’s been a bit of a lull with big game releases. Many are being delayed due to the pandemic,” said Eric Abbruzzese, a senior analyst with ABI Research.

“We do show a plateau and decline in current generation game console shipments as purchasers wait for the next generation to launch,” he told TechNewsWorld, “although that is not directly correlated to playtime generally.”

New consoles from Microsoft and Sony are expected this holiday season. “Traditionally there is a ramp down in the months preceding the launch of new consoles,” Moor’s Vena commented.

Another factor that may have influenced the console numbers has to do with the survey methodology itself.

“The survey is of heads of broadband households,” Hanich explained. “A lot of households that own game consoles also have children. What we believe happened during this time is that the child, staying home from school, would have taken over the gaming console, and the adults in the household would have turned to a different platform.”

Hanich also noted in her report that consumers find cloud gaming intriguing, but do not yet have preconceived notions of what a service “should” look like. “They are open to multiple business models,” she wrote. “It is anyone’s market.”

Abbruzzese agreed that it’s too early to say what the dominant model will be for cloud gaming, but he finds some interesting activity around first party services being integrated into existing ecosystems.

“PlayStation Now and Microsoft xCloud are the best examples of this,” he said, “specifically with xCloud being announced as a bundle option with Microsoft’s Xbox Game Pass.”

“Otherwise,” he continued, “there’s the split between a Netflix style model, a pureplay cloud monetization model, such as Google’s Stadia, and a virtual PC model, as in Geforce Now.”

“Virtual PC is the most appealing to PC gamers that have a library of content already,” he added. “Stadia-like models appeal most to the casual gamers, and a Netflix like model can appeal to both sides.”

George Jijiashvili, a senior analyst with Omdia, a research and consulting firm based in London, though, believes the subscription business model will emerge as the dominant one for cloud gaming.

“2019 saw the launches of Apple Arcade, Google Stadia, and Google Play Pass, while Microsoft’s xCloud will be integrated into its Xbox Game Pass subscription service this year,” Jijiashvili explained. “The number of subscribers of existing services such as PlayStation Now and EA Access is also ramping up.”

He added that cloud gaming is experiencing a renaissance, with many key network, hardware, technology and content players ramping up investments in the space.

“This has led to a significantly refined cloud architecture to support cloud gaming, compared to what was offered by the likes of OnLive nine years ago,” he said. “The ongoing 5G network rollout, promising high speeds and sub-10 millisecond latency, has further boosted interest.”

Jijiashvili maintained that the key to cloud gaming’s success will be its ability to harness connected devices — from smartphones to smart TVs — to deliver console-like gaming experiences without the need for consumers to invest in dedicated gaming hardware.

According to Omdia’s forecasts, he noted, the global installed base of Internet-connected smart TVs alone will outnumber that of home game consoles by four to one by 2022.