London trainer Mark Tibbs has spoken of his disappointment at parting company with WBC No. 1 heavyweight contender Dillian Whyte.

Whyte, who is preparing for his fight with Alexander Povetkin on Matchroom’s pay-per-view bill on August 22, posted news of the split on Instagram three days ago.

He wrote: “Just to let everyone know Mark Tibbs and I are no longer working together as boxer and trainer. I’m training in Portugal, Mark has a young family, and his own new gym in the UK. “As it stands it just hasn’t worked out in the way we both hoped it would. Mark came into my team 4 years ago and has helped me turn into the world class fighter I am today. Mark is a great trainer and I will always be grateful to him and his dad for all they have done.”

“I was very, very shocked and surprised,” Tibbs said to BoxingScene.com.

“As the time went on, I wasn’t surprised, if you know what I mean… I’ve been in and out of Portugal a couple of times with the date change [Whyte’s fight with Alexander Povetkin was originally scheduled for May 2, then July 4 due to coronavirus] and I’ve got things happening in London and I’ve had to make sure my family is okay and my son and my parents and my missus’s mum and dad… I made myself available. The message was sent out on the 26th or 28th June to Dillian’s people that I’m available and I should be out there now [with Whyte in his Portuguese training camp]. I should be in camp, and I was hoping to get out there but I never heard nothing until a couple of days ago when Neil Sibley, Dillian’s lawyer, contacted me and said, ‘Dillian’s not going to use your services’.”

In some ways, Tibbs saw it coming.

“I haven’t spoken to Dillian in a long long while,” he stated. “He hasn’t been communicating with me. I spoke to Richie Riakporhe [managed by Whyte/formerly trained by Tibbs] a week or so ago. He said, ‘It’s a bit awkward, Mark, I’m managed by Dillian and I’ve got to go my own way’ and John Harding Jnr spoke to me a while ago. They’re all managed by Dillian.”

They were all coached by Tibbs but now he has to assemble a new stable.

“I’ve got to build again,” he said. “I’ve got a couple of prospects around me, I’ve got a gym opening up in Rainham in Essex and it should be open by the end of the month so I will start building and hopefully make some champions.

“Someone said to me, ‘Mark, with hindsight, you’ve got your new gym, you’ve got this and that, would you say it’s worked out for the best? I’d say, ‘No, I wouldn’t look at it like that’. If I could look back on my life four years ago when I started working with Dillian and seen this ending I wouldn’t have gone through what I went through.

“I feel pretty upset about the lack of communication from Dillian and I feel very upset that over a month ago I sent him an email saying I should be in camp because the date’s official, let’s get rolling and then a couple of days ago I got a letter from his lawyer, who’s a very nice man, Neil Sibley, saying Dillian no longer wants contact or my services. We didn’t have a falling out. He was a little upset when the date changed and I said, ‘It’s not my fault or no one’s fault, it’s the pandemic, the whole world’s in the same situation… It ain’t us’.

“I returned to the UK and when Eddie [Hearn] announced the official date I then sent Dillian and his managers an e-mail in case they hadn’t read a text I sent and I didn’t hear anything until I heard from the lawyer, which I’m disappointed with.” 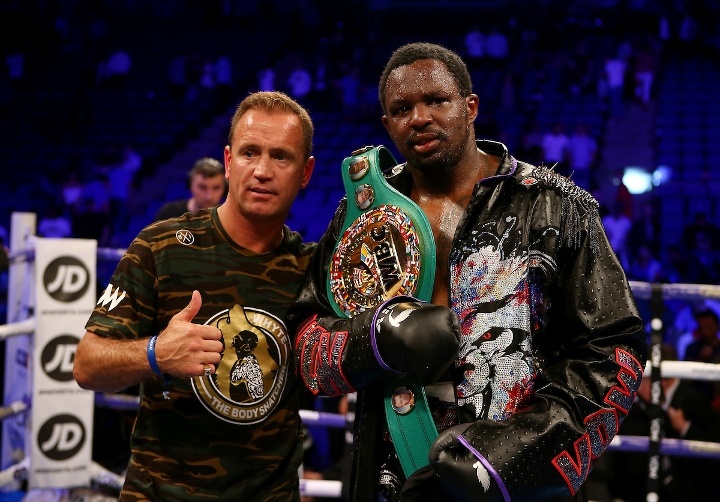 Tibbs and Whyte had a successful run for four years. Asked for the pinnacle of their time together, Tibbs couldn’t name just one moment.

“Each and every one was a highlight but the Joseph Parker fight… both the Dereck Chisora fights were exciting and gripping and when he cleaned him out in the second fight it was beautiful. Also the Oscar Rivas camp was a very good camp and a very good result,” Tibbs said.

“I can only say that we made it to world number one together; world number one and we should have fought for the world title a while back but you know as well as me what’s been going on [with the WBC] and he hasn’t. So I went from an eight-round fighter when I first hooked up with him to a world title contender and it speaks for itself. He had no amateur pedigree as such, so I think we’d done well.

“I wouldn’t want no one to work with me if they don’t want to work with me but they’ve got to come and tell me. He walked in West Ham Boxing Club four years ago and we sat down and had a chat and he sends a lawyer into me to part company. But Richie and John Harding Jnr picked the phone up and they spoke to me so that’s alright.”

Tibbs refuses to blame the WBC and Whyte’s never-ending trials with the governing body for causing their time together to come to an end.

“He’s got a good team around him and I’ve never got involved in any of that,” said Tibbs. “They do their own thing. Regarding the WBC thing, that was not why I was not available. I wouldn’t go four years without wanting to finish my job when he’s at world number one, let’s have it right.

“It’s miscommunication… not from my behalf, but lack of communication. I don’t know what’s gone on but I wish him all the very best.”