Daniel Roman has never sought the easy way to the top.

With that, it should come as no surprise that he stays that course as he looks to reclaim what was once his own.

The former unified 122-pound titlist will make his debut on the Premier Boxing Champions (PBC) circuit in a big way, landing on the undercard of a September 26 split-bill Showtime/PBC Pay-Per-View co-headline by Jermall and Jermell Charlo. Roman will appear in a 12-round junior featherweight title elimination bout.

Roman is tentatively slated to face Puerto Rico’s Emmanuel Rodriguez (19-1-1, 13KOs) in a matchup of former titlists, according to announcement by Showtime on Wednesday. However, sources inform BoxingScene.com that Roman could wind up facing another opponent, though declining to specify the reasons.

The pairing is one of four intriguing fights gracing the combined undercard, all carrying title fight implications. 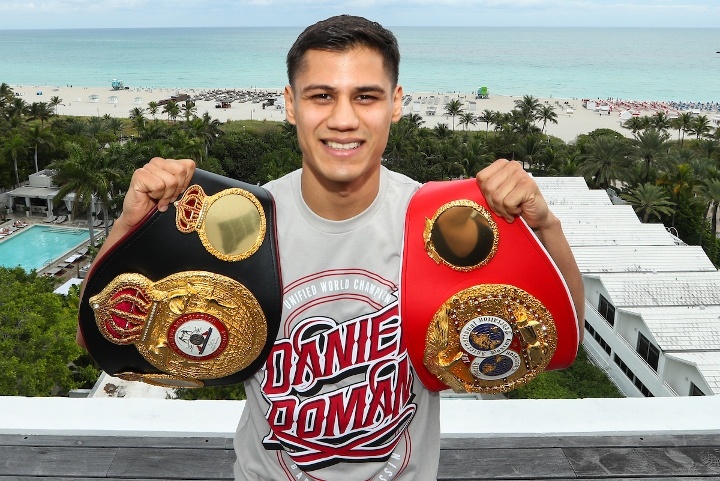 Los Angeles’ Roman (26-3-1, 10KOs) resurfaces for the first time since dropping a heartbreaking 12-round decision to Murodjon Akhmadaliev (8-0, 6KOs) this past January in what remains a leading candidate for 2020 Fight of the Year.

The bout ended Roman’s unified title reign, having held at least one title since hitting the road for a 9th round knockout of unbeaten WBA titlist Shun Kubo in September 2017 in Kyoto, Japan. Four successful defenses followed including a 12-round win over TJ Doheny to unify the WBA and IBF titles in their Fight of the Year-level war last April.

Rodriguez (19-1, 12KOs) also fights for the first time since his title reign came to a close. Like Roman, the talented boxer-puncher from Vega Baja, Puerto Rico also hit the road for his first major title—soundly outpointing Paul Butler to claim the vacant IBF bantamweight title in May 2018.

One successful defense followed,  a thrilling 12-round win over then-unbeaten Jason Moloney in October 2018 as part of the World Boxing Super Series bantamweight tournament. Rodriguez’s luck ran out in the semifinal round of the tournament, suffering three knockdowns in a 2nd round stoppage loss to three-division titlist and pound-for-pound entrant Naoya Inoue last May.

Efforts to return to the ring last November fell flat at the scale. Rodriguez was due to face former bantamweight titlist Luis Nery, who has a sordid history of missing weight including his doing so in what eventually killed plans for their matchup. Rodriguez’s name has since been floated as a possible challenger to unbeaten WBC 122-pound titlist Rey Vargas, although such plans were dulled by the ongoing coronavirus pandemic.

Instead, he will now have to go through Roman to get there.

Three months later came an upgrade to WBA “Regular” titlist, although his belt was not officially at stake in his credited first defense. Figueroa fought to a 12-round draw with former WBC titlist Julio Ceja, who miserably missed weight ahead of their Fox PPV undercard clash in support of Deontay Wilder’s repeat knockout win over

Also on that portion of the card, Diego Magdaleno (32-3, 13KOs) returns following a career-resurrecting Fox-televised win over Austin Dulay this past February. The former two-time title challenger from Las Vegas will face Mexico’s Isaac Cruz (19-1-1, 14KOs) in a 12-round bout to determine the #2 contender to the IBF lightweight title currently held by Teofimo Lopez (15-0, 12KOs).