That VideoGame Blog
REVIEW / Out of the Park Baseball 21 (PC)

Prior to the start of the MLB season we are fortunate to get two quality baseball games to hold us over until Opening Day. One of those games is Out of the Park Baseball 21, the latest iteration of the premier baseball sim manager. I only just discovered OOTP when I grabbed OOTP 19 during a Steam sale and was blown away by the depth that these games offer. I also really loved OOTP 20. With the 2020 MLB season hold, there’s no better time to jump into the newest offering of OOTP 21.

In OOTP 21 you assume the role of manager/GM of your favorite baseball team, whether it be MLB or any of the 15 international leagues available, complete with real rosters and minor leagues (if available). There are also historical leagues that you can play spanning back to the inception of the game in 1871. Since I am a real life fan of the Tampa Bay Rays, I loaded the team in Challenge mode (ie, achievements enabled and no commissioner abilities) to take the current roster and supremely talented farm system out for a spin. Returning from last year is the ability to “Live Start” from the exact day in season, so you could start your play through to be up-to-date with your favorite team’s record and recent transactions. We’ll have to wait to see how this will work with the season on hold. 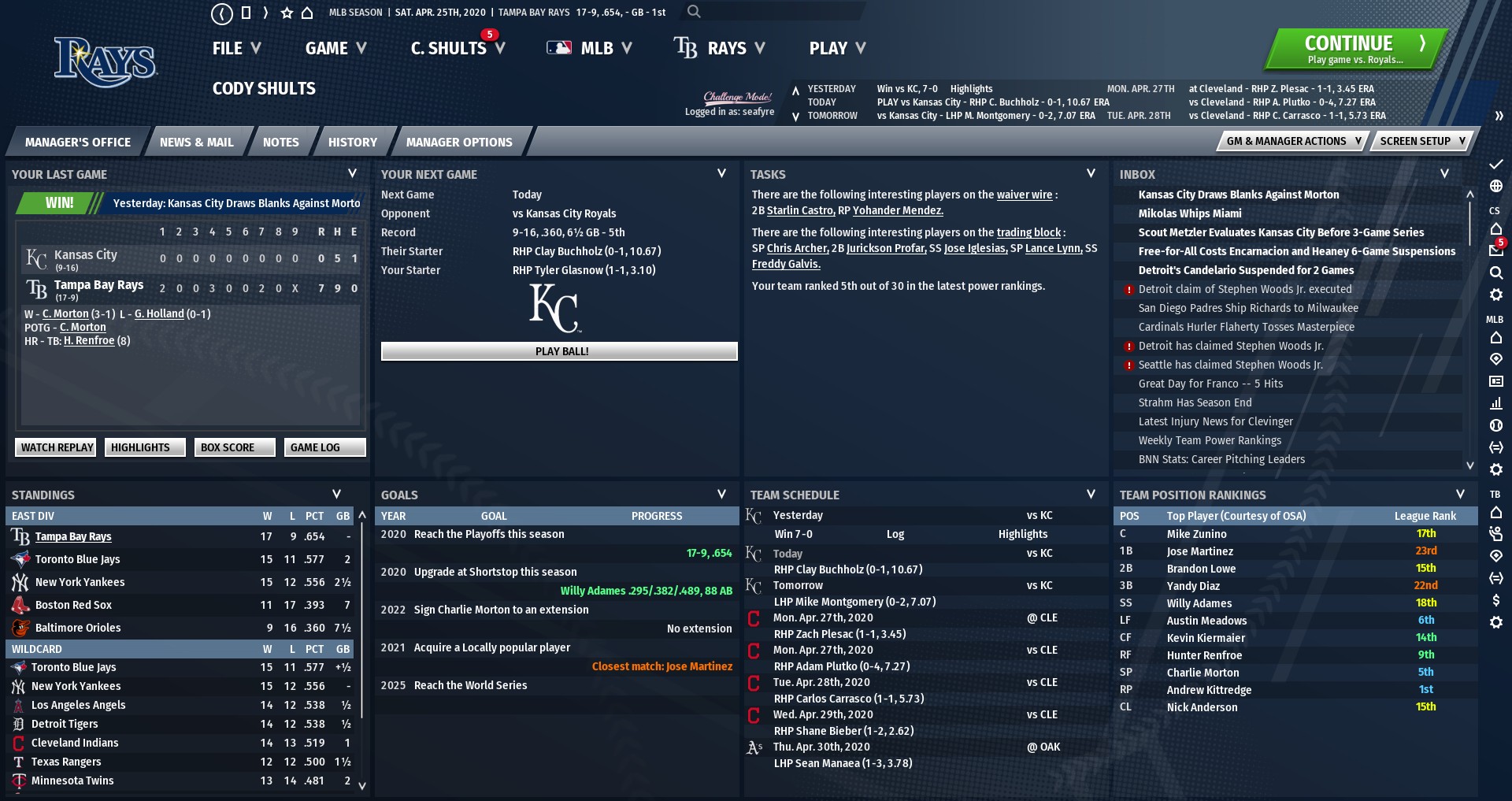 Because there are so many things you can do with your team in OOTP 21, heavy customization of each of your menu screens has been updated. You can keep track of everything from team finances and roster moves to hiring/firing your rookie league team manager, so you’ll need to put your organizational skills to work to get everything setup to your liking. I tend to sit in the Manager’s screen a lot, so I was able to set it up to get a glimpse of all aspects of my team that felt relevant for day-to-day operations. You can do this for every screen and menu you go through, so if you are an organization buff, go nuts! Also, the new menus and UI are as sleek as ever. 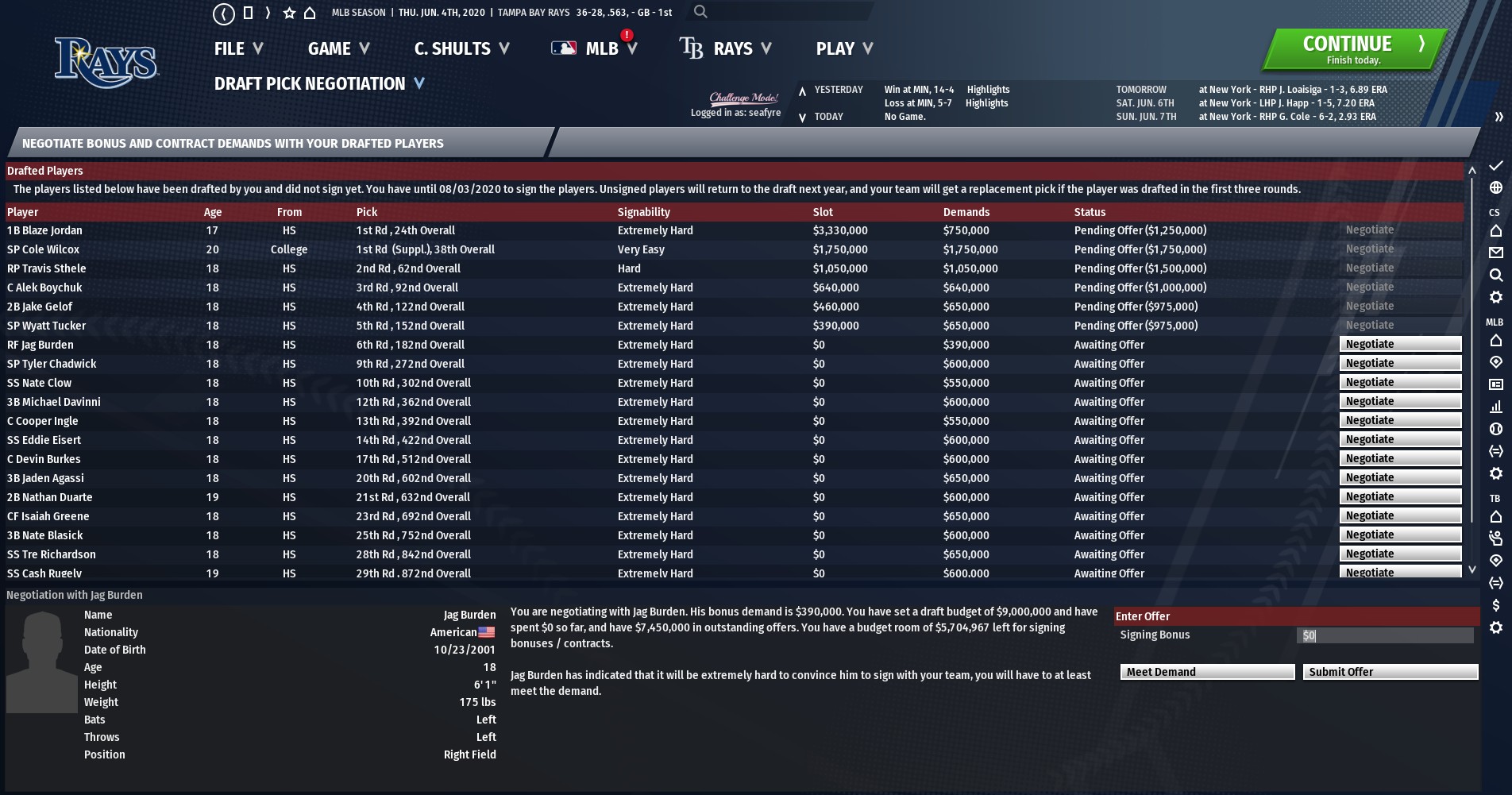 If you decide not to get too deep into things like farm team management or hiring staff, you can set the AI to do that. The AI can do as much or as little as you’d like, so if you need some time to ease into the depths of baseball management, let the AI help you out. Every screen has tools to optimize your experience, whether it be sorting your players by on-base percentage or scouting prospects for the upcoming draft. The amount of time and energy you want to devote to any one thing is up to you and the AI will help you out for the most part (more on the AI later). 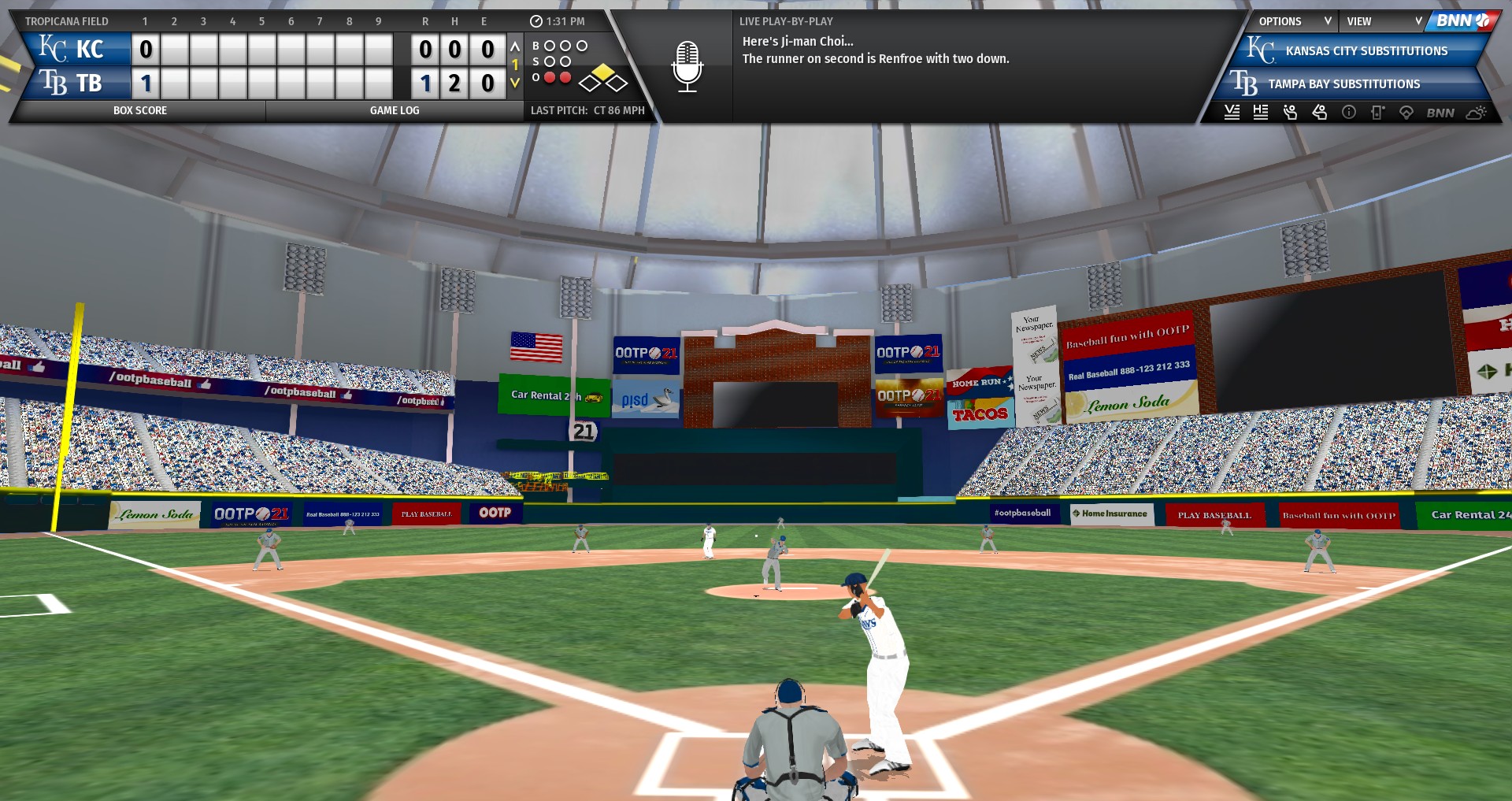 OOTP 21 offers some new improvements to playing games; namely, new 3D camera angles have been included. While these graphics aren’t at the level of MLB the Show 20, these improvements made me jump into more games than I did in OOTP 20. You can sim half innings or decide each pitch when you play a game against your opponent; the level of commitment to each game is entirely up to you. I’d recommend setting up a schedule of games you feel you must play (apart from the playoffs!) so you don’t get too bogged down in the day-to-day of such a long season. Also, those of you looking develop your own ballparks now have the tools to build 3D parks. I’m sure the Tampa Bay Rays would appreciate a new ballpark but I didn’t have the time to dabble with these tools for this review. 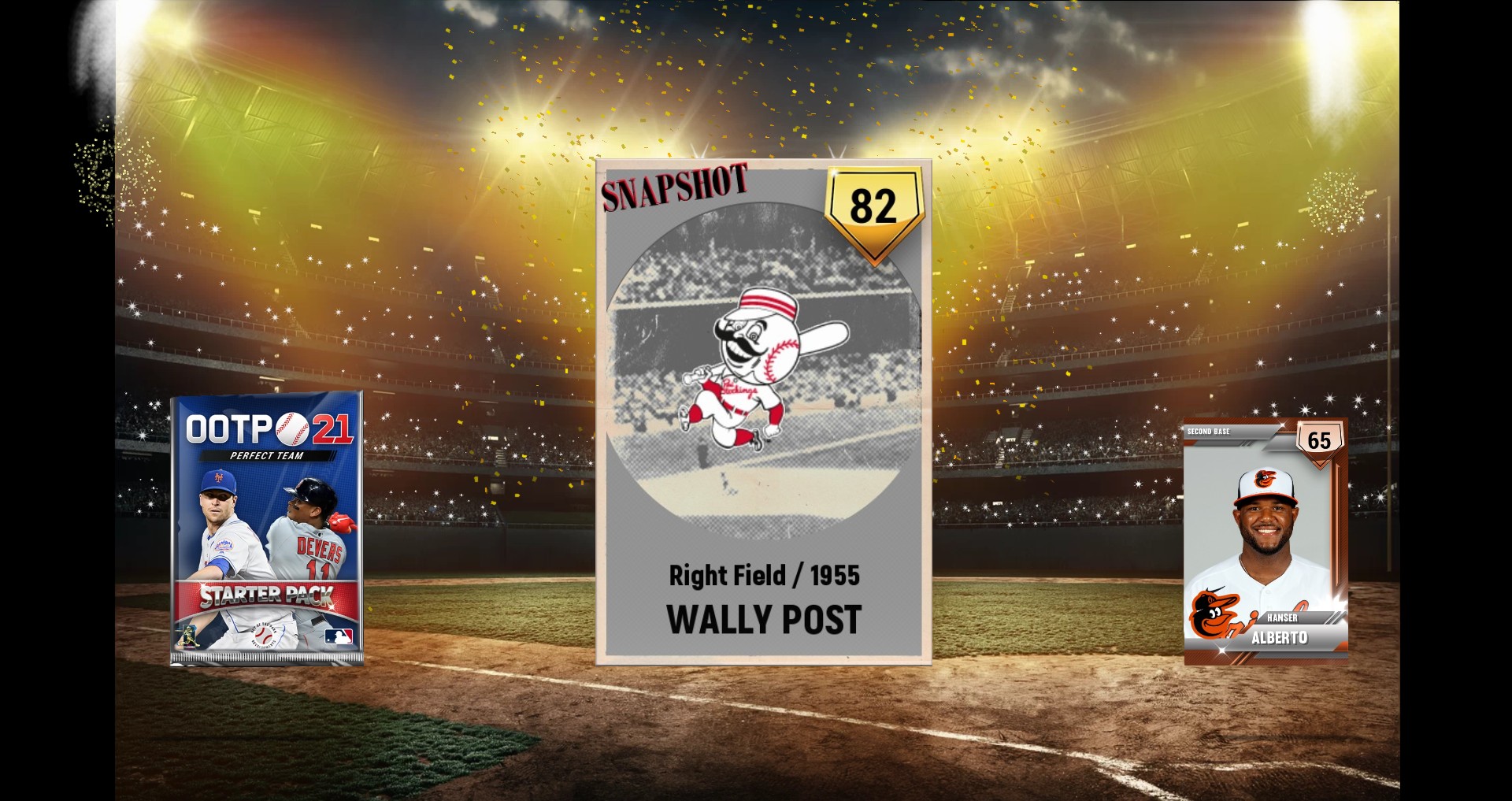 The Perfect Team mode continues to improve in OOTP 21. This online mode allows you to compete in weekly leagues with a team made up of player cards (much like Diamond Dynasty mode in MLB the Show). You’ll get some packs to rip open and put together a squad to immediately compete online, but you’ll want to keep playing in order to earn in-game currency to buy new packs or buy player cards via auction. OOTP 21 boasts a huge collection of cards to collect, offering you the opportunity to field historical figures alongside today’s best players. There are also missions for you to unlock star players from your favorite teams or legends from the past. The developers will be continually updating Perfect Team mode as the season progresses, including tournaments and more cards to unlock. 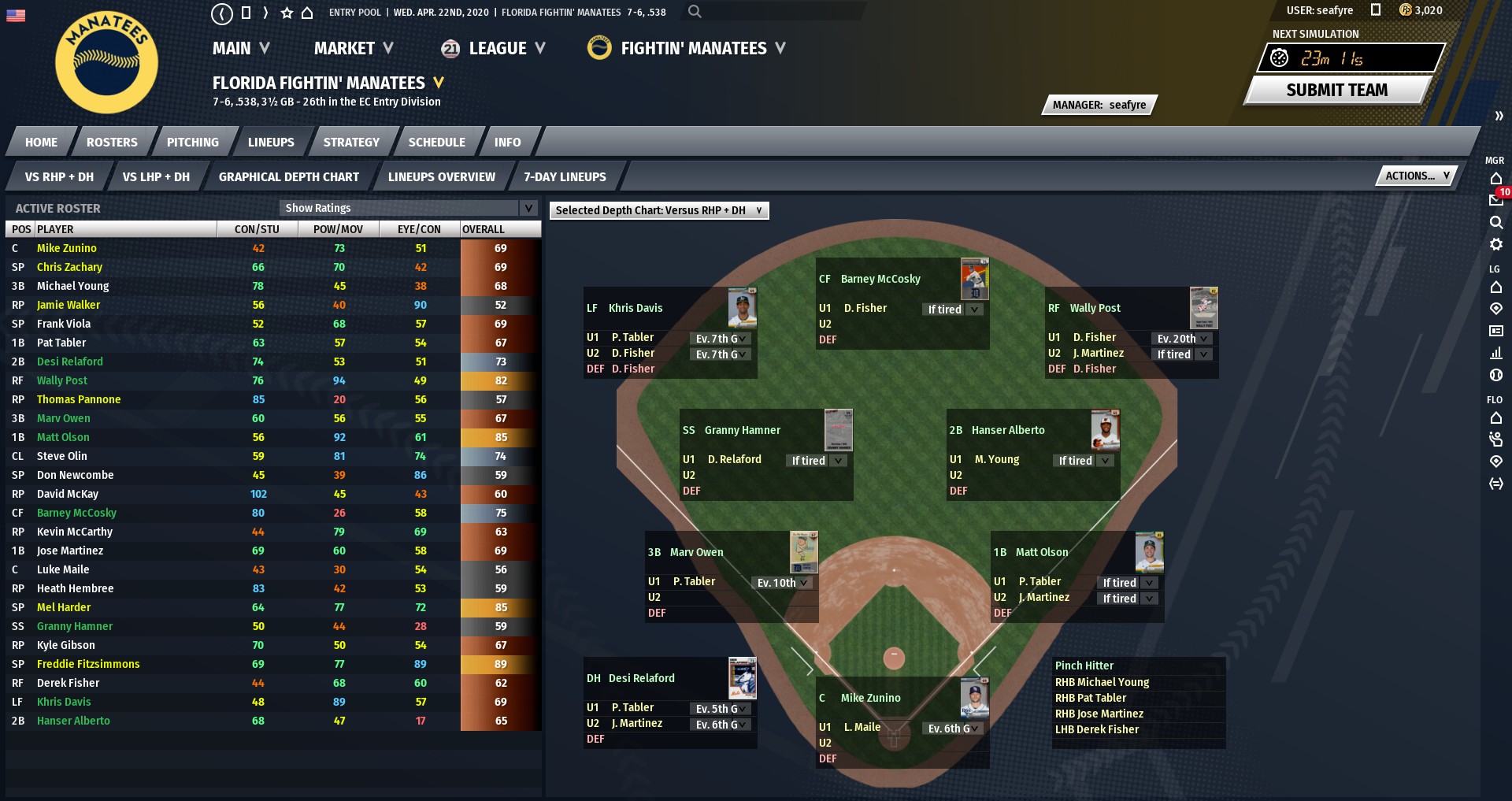 There are still some aspects of OOTP 21 that may seem minor to most. Namely, the AI can make some questionable choices. Most trades offered by other computer-controlled teams are generally awful. The only way to make it somewhat fair is to initiate or discuss the trade, because everything coming at you is a lowball offer. You still can’t trade draft picks in Challenge Mode (you have to be a commissioner and enable this setting) which can be slightly annoying if you are in rebuild mode because most computer-controlled teams overvalue (unproven) prospects (although I am used to this in some real fantasy baseball leagues). Lastly, your ownership doesn’t react well to elements that are out of your control during the season; I currently have Charlie Morton on the 60-day IL for Tommy John surgery and there is no way I am going to resign him after this because his ratings are going to drop when he returns, but Stu wants him back. While this sounds like something the real Stu Sternberg would want because the man is an idiot, any logical person would say nope, this make no sense. Love you Charlie but at your age and this measly payroll I have to let you go. The TL;DR of this is that you will get a negative response from your owner even when it makes logical sense not to resign a guy or you couldn’t make the playoffs because your entire starting rotation was on the IL for half the year. 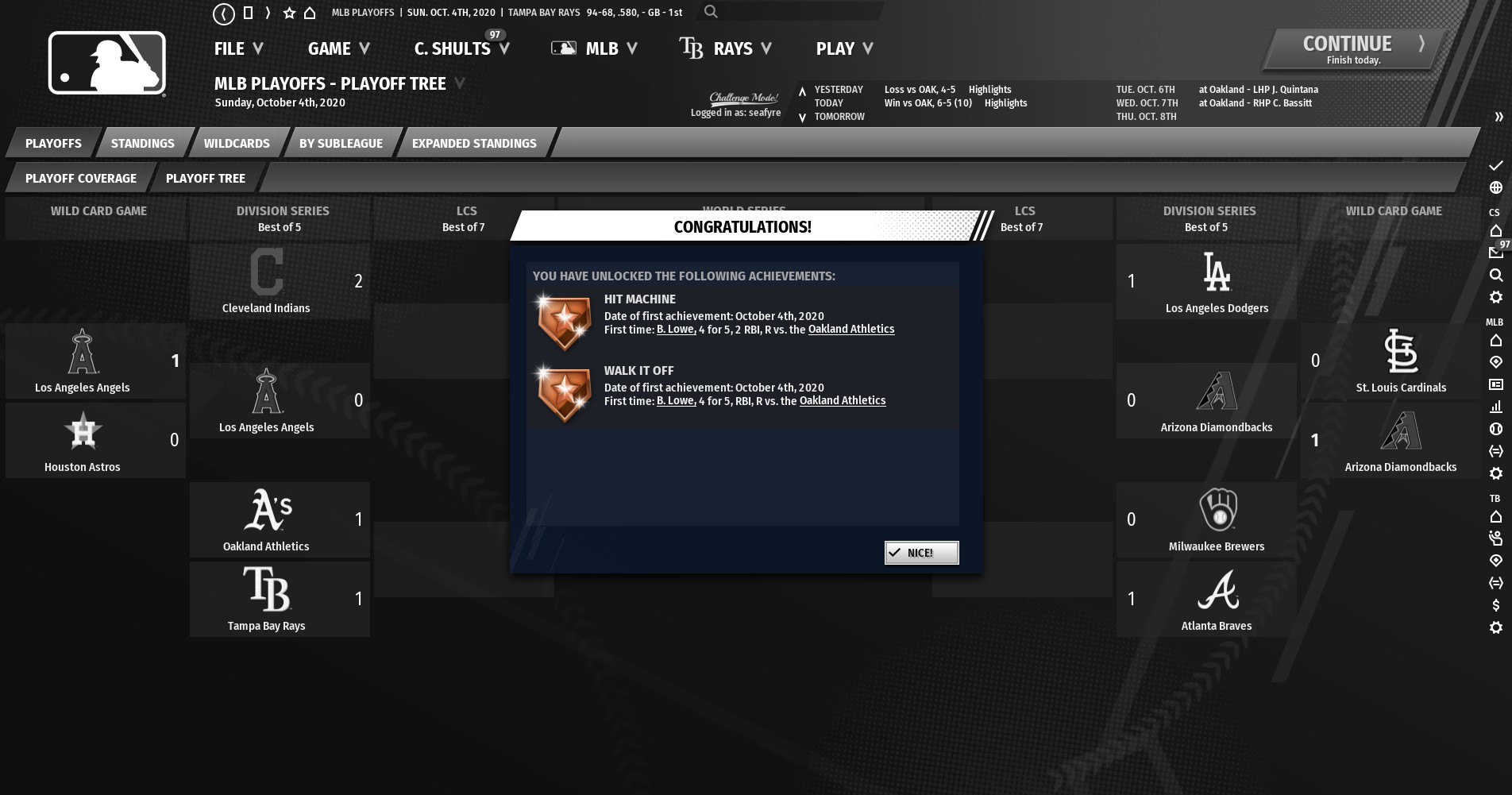 Nitpicking aside, OOTP 21 is yet another strong release in the OOTP franchise, continuing to improve year after year and keeping us coming back for more. With baseball on hold, this has been scratching just about every itch considering the circumstances. So if you are a baseball enthusiast who refreshes FanGraphs multiple times per day (which you should definitely still keep doing because it helps those guys out during these uncertain times), OOTP 21 is going to be your favorite sim. If you are on the fence about getting this invested in a baseball game, I still recommend checking it out!

The post REVIEW / Out of the Park Baseball 21 (PC) appeared first on That VideoGame Blog.