The first Matchroom Boxing USA card during the pandemic is now in need of a new headliner.

BoxingScene.com has learned that reigning flyweight titlist Julio Cesar Martinez was forced to withdraw from his planned title defense versus Puerto Rico’s McWilliams Arroyo due to an illness which will sideline him through the end of July.

The bout was due to headline a Matchroom Boxing USA-promoted show August 15 literally in the streets of downtown Tulsa, Oklahoma. Mexico City’s Martinez was forced to withdraw after suffering a respiratory tract infection which affected his ability to train over the course of the past week.

News of the withdrawal was confirmed by the World Boxing Council, whose flyweight strap Martinez (16-1, 12KOs) claimed in a 9th round stoppage of former champ Cristofer Rosales in their vacant title fight last December in Phoenix, Arizona. Martinez made one successful defense, outpointing Wales’ Jay Harris in their 12-round thriller on February 29 in Frisco, Texas. The fight was part of the last show to have streamed live on DAZN prior to the start of the ongoing coronavirus pandemic. 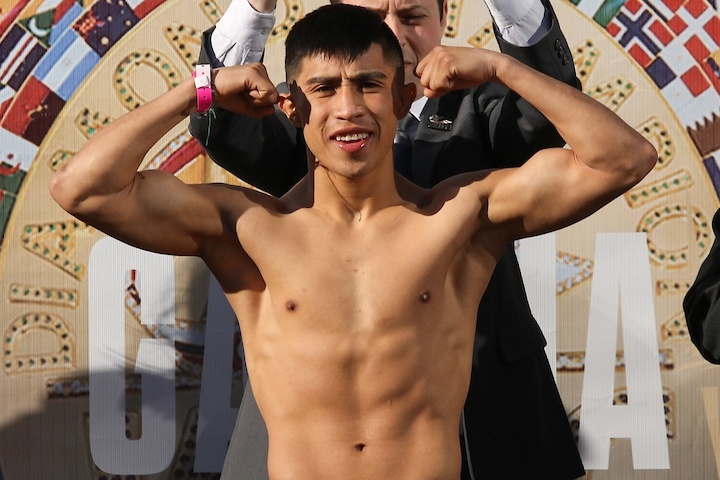 Representatives from Martinez confirmed to BoxingScene.com that his current health issues are not at all COVID-related and that he has tested negative for the infectious disease. BoxingScene.com has been informed that efforts are being made to reschedule the bout for a September show on DAZN.

Arroyo (20-4, 15KOs) is attempting his third bid at a flyweight title. The 2008 Puerto Rico Olympian came up short in an April 2015 bid versus then-unbeaten titlist and pound-for-pound entrant Roman ‘Chocolatito’ Gonzalez, coming seven months after a questionable 12-round loss to Amnat Ruenroeng in September 2014.

Following a September 2018 loss to Kazuto Ioka—who has since added a fourth divisional title to his collection—Arroyo has won three straight, all in his native Puerto Rico.

Given the late development, it has yet to be made known whether the rest of the August 15 show will proceed intact or if a new main event will be sought. Also currently on the card is a welterweight title fight between undisputed champion Cecilia Brækhus (36-0, 9KOs) and unified 140-pound titlist Jessica ‘CasKilla’ McCaskill (8-2, 3KOs) who moves up in weight.