According to UFC President Dana White, he is still speaking with former five division world champion Floyd Mayweather Jr. with respect to a potential ring return.

Earlier this year, White and Mayweather had come together at a basketball game and discussed a venture where they would unite to promote a potential fall event – with Mayweather fighting in the headliner.

It was never fully explained if Mayweather would actually have a sanctioned fight or an exhibition.

“Floyd and I still have dialogue and go back and forth,” White said to TMZ. “We’re still interested on both sides.” 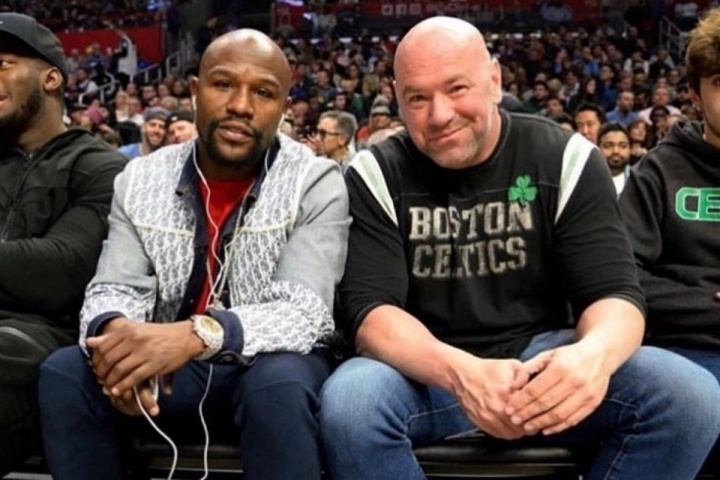 The coronavirus pandemic erupted in March, which placed a big halt on all sporting events – and pushed back any plans for a Mayweather return.

White told TMZ that it’s still “very possible” that a deal with Mayweather will be reached.

Mayweather retired from boxing back in August of 2017, with a perfect 50-0, record, after he stopped UFC superstar Conor McGregor in the tenth round of a cross-sport boxing match at the T-Mobile Arena in Las Vegas.

Their fight was the second most lucrative pay-per-view in history.

A rematch is unlikely at the moment, with McGregor once again announcing his retirement back in June.

Mayweather came back to the ring for a New Year’s Eve exhibition fight in December of 2018, when he headlined a pay-per-view card in Japan and picked up an easy win with a first round demolition of Japanese kickboxing star Tenshin Nasukawa.

As the months pass by, Mayweather could be tempted to fight again, with several retired boxers coming back to the ring for exhibition fights in 2020. The biggest of those fights will take place on September 12, when former heavyweight champion Mike Tyson enters the ring for the first time in fifteen years to fight former four division champ Roy Jones Jr. in an eight round exhibition.