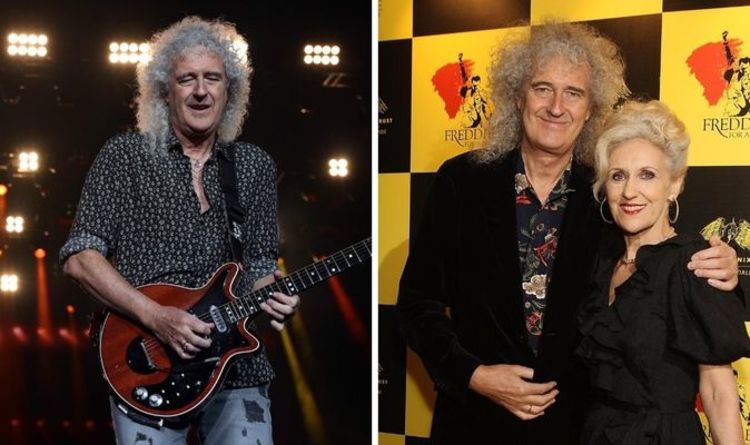 Brian May makes up a quarter of Queen, alongside the original line up of Roger Taylor, John Deacon and the iconic Freddie Mercury. Now he is still playing the guitar with Taylor on the drums, though they have enlisted the help of Adam Lambert to provide some vocals. However, in his private life, he met and married an EastEnders actress.

Before meeting his current wife, Brian May was married to another woman, Christine Mullen.

Brian and Christine were married in 1976, and had three children.

They separated in 1988, and two years before Brian met Anita Dobson, who is known for playing Angie Watts in EastEnders.

The couple met in 1986 in Beverly Hills at a movie premiere.

Brian, while speaking on Loose Women in 2015 alongside Anita, admitted he fell in love with her before he had divorced his wife.

However, there were hard times in their relationship, and Brian experienced a depression in the late 1980s and early 1990s, after the death of his parents and Freddie Mercury.

For Brian, however, Anita became a lifeline, and someone who was “essential” to him.

“If she wasn’t by my side now, I wouldn’t be in this state. She’s somehow part of me.

“Ever since I first set eyes on her, she’s been an essential part of my life.

“Even my mum used to say, ‘There’s a kind of sunshine that flows out of Anita.’ And once you’ve experienced it, you can’t do without it.”

For Anita, her and Brian’s relationship saw her make a commitment she never thought she would, and they married in 2000.

Speaking to Woman and Home, Anita said: “I was always slightly afraid of marriage because I didn’t like the idea of being tied down.

“Even when I met Brian when I was in my mid-thirties, I didn’t actually see it on the cards for us. He was a huge rock star and our lives were very different.

“But later I reached a point where I thought, ‘You’ve gone through all the hard stuff with this man and you’re still here, what does that tell you, Anita Dobson?’