Skip to content
Perhaps one of the most missed Linux desktop environments is Ubuntu Unity Desktop. It was either loved or hated by users otherwise endeared to the vastly popular Ubuntu Linux OS. An infant cottage industry of sorts has made a smattering of appearances and disappearances with replacement Unity integrations. That brings us to this week's Linux distro review of Ubuntu Unity Distro 20.04, developed by Rudra Saraswat. <a href="http://www.technewsworld.com/story/86719.html?rss=1">Source Tech News World</a>

Perhaps one of the most missed Linux desktop environments is Ubuntu Unity Desktop, developed by Ubuntu’s parent company, Canonical. It was either loved or hated by users otherwise endeared to the vastly popular Ubuntu Linux OS.

But now that it has been replaced by GNOME 3 as Ubuntu’s default desktop environment. An infant cottage industry of sorts has made a smattering of appearances and disappearances with replacement Unity integrations.

The Unity desktop was a radical change from more traditional desktop offerings. Its vertical panel was anchored to the left screen edge. It introduced a totally different graphical user interface at a time when the more standard GNOME 3 desktop was undergoing its own set of design changes.

Canonical introduced Unity some 10 years ago. After Ubuntu 18.04 LTS was released in early 2018, the developer abandoned Unity 7 in favor of the GNOME 3 desktop. That was mostly due to unsolved technical issues in getting the planned Unity 8 to run with the Mir display server with the planned replacement of the X Window System with Wayland for Ubuntu.

Unity 8 was next on Canonical’s development board for use in its planned “unifying” mobile phone and tablet projects. Those plans went away as well. But the Unity 7 desktop did not fully go away.

That brings us to this week’s Linux distro review of Ubuntu Unity Distro 20.04, developed by Rudra Saraswat.

The current Unity 8 Project by the independent UBPorts community has continued to develop the technology, giving the discarded desktop new life. Unity 8 also lives on in Ubuntu Touch for mobile devices by another developer, like the PinePhone.

The Unity desktop also lives on as a standalone desktop you can install from repositories. But you will not find other Linux OSes using the Unity desktop, at least by mainstream communities.

Until now, that is. Unity Desktop lovers have a few options to once again relish the Unity experience on a reliable and stable Ubuntu Linux base.

Over the last year or so, a few independent software developers cobbled together Ubuntu remix-style releases running Unity 7. You can find traces of these in search results. But mostly what you find are shuttered websites or abandoned releases.

I spent several hours combing through Internet searches for a worthy candidate. The few with potential that I found were difficult to install or were not yet out of alpha or beta development.

Why did I bother looking? It was mostly curiosity. I also received numerous reader requests for Unity desktop options and a few notices about new Unity-based distros being released.

Most of these options are not yet ready for prime time. Others come with bothersome baggage.

Several Unity Remix downloads required fees in order to download. One or two led me to a download site that asked for a premium upgrade to download the multiple files being offered for installation.

After all of my research, I found a potentially good option, Ubuntu Unity Desktop, with the latest version released on May 28, 2020.

If you miss the Unity desktop or are curious about why it was so loved, read on to learn how well this Unity-driven Linux distro performs.

I was not an avid fan of Ubuntu’s Unity desktop when it first arrived. That was one of the main points driving me to another option. But Ubuntu Unity Distro offers a dynamic and productive desktop that is a lot more suitable to my current UI preferences.

Keep in mind that despite its name, developer Saraswat’s creation is not officially part of the Ubuntu family of Linux distributions. At least not yet, anyway.

GNOME 3 has come a long way towards making an acceptable desktop environment. It is considered by many users to be one of the best desktops available.

As Ubuntu’s default desktop, the appearance is tweaked greatly to give it much of the flavor of what was Ubuntu’s Unity 7.

That look and feel you get with Ubuntu’s default desktop carries over to the Unity 7 experience Saraswat’s Ubuntu Unity Distro provides.

One of the best attributes of Unity 7 is its keyboard shortcut strategy. You can navigate through just about every conceivable action without taking your hands off the keyboard.

Say goodbye to the mouse. For keyboard jockeys, the mouse pointer is strictly optional.

The opening screen of this Unity distro is not a welcome display typical of many other distros. Instead, you see a large window that lists the keyboard shortcuts. Print it out and keep it at eye level for handy reference.

The Ubuntu 20.04 LTS “Focal Fossa” base is solid. The Unity 7 tailored to this Ubuntu Unity distro is a refreshing approach. It does not matter if you preferred Unity over GNOME 3. This distro just works out of the box. 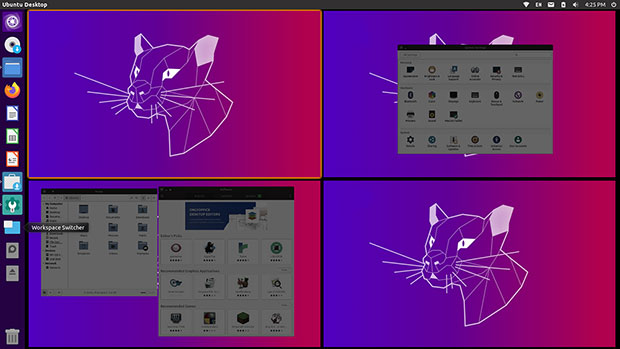 Go to Settings / Appearance to enable the virtual workspaces feature. That adds a switcher applet to the vertical panel on the left edge of the screen.

Unity 7 here is convenient and efficient. And it will no doubt be even better soon.

An Alpha 1 build of Ubuntu Unity 20.10, aka Groovy Gorilla, is now available for download here. Or, you can download MEGA for Business here.

What you get is not a carbon copy of Unity 7 as it was in Ubuntu. This developer has made some very effective improvements.

For instance, the Plymouth Boot Screen has the new Ubuntu Unity branding displayed. LightDM replaced GDM3. Another change is swapping Nemo as the default File Manager to replace Nautilus.

Plus, the Global Menu with the combination of the Head-Up Display (HUD) replaced the standard application menu system with a searchable interface. You also have new default wallpaper and many new wallpaper options — and so much more good stuff to check out. 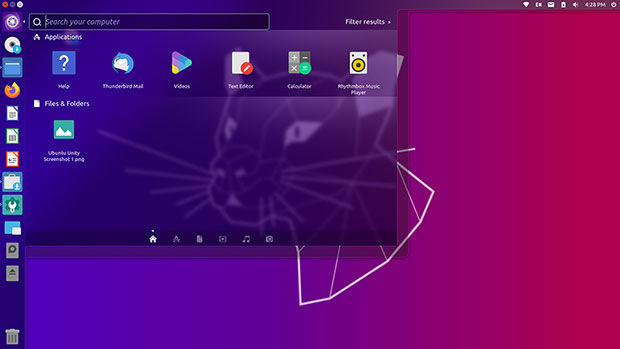 The Global Menu with the combination of the Head-Up Display is one of the most popular features in the Unity 7 desktop.

The included software is no slouch either. This distro comes stuffed with the usual top-notch application inventory.

Here is a sampling:

I have been tempted to call this release a remix. That is, after all, what it basically is. But the developer with this V4 release changed the distro’s name from Unubuntu to Ubuntu Unity in the ISO.

So if you search for Unity 7-based distros and come upon an Unubuntu title for download, you have the earlier release without the changes now available in V4.

The Ubuntu Unity Distro is an impressive operating system. It blends new stuff with old. It has a modern yet still familiar flavor to it.

Want to Suggest a Review?

Is there a Linux software application or distro you’d like to suggest for review? Something you love or would like to get to know?

Please email your ideas to me, and I’ll consider them for a future Linux Picks and Pans column.

And use the Reader Comments feature below to provide your input!

Jack M. Germain has been an ECT News Network reporter since 2003. His main areas of focus are enterprise IT, Linux and open source technologies. He has written numerous reviews of Linux distros and other open source software. Email Jack.