Skip to content
Samsung’s Galaxy M series is a budget smartphone line that is sold online only. The most powerful model in the series should be unveiled soon, and that would be the Galaxy M51. Rumored specs include a China Star OLED panel making this possibly the first Samsung phone with an AMOLED display to use a screen not made by the handset’s manufacturer. The Snapdragon 730 SoC is expected to be under the hood along with 8GB of memory and 128GB of storage; an in-display fingerprint scanner is believed to be onboard. Around back is a quad-camera setup that includes a 64MP rear camera. A front-facing punch-hole snapper will take selfies.
On Friday, the Bluetooth Special Interest Group web site revealed that the Galaxy M51 had been certified with Bluetooth 5.0 aboard. The listing also revealed the phone’s model number of SM-M515F. The latest rumor calls for the phone to be released in September in line with the usual one to two months after receiving certification. 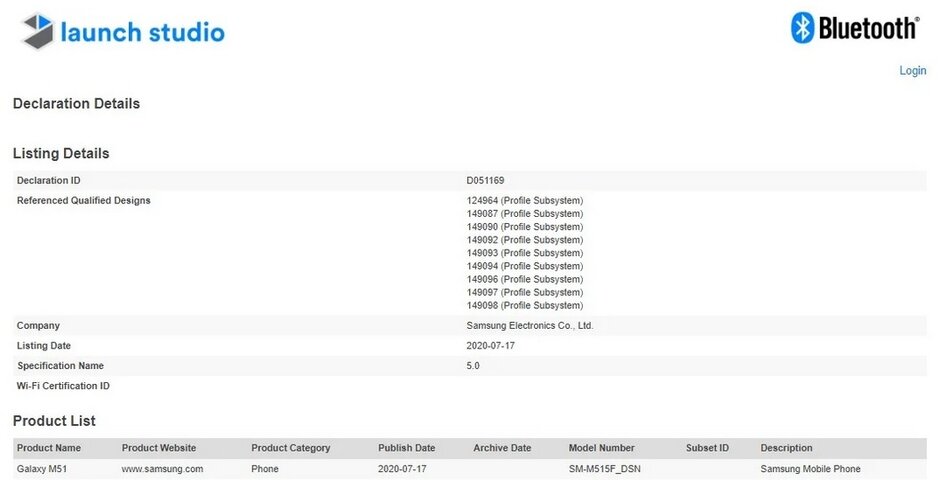 Samsung Galaxy M51 is certified by the Bluetooth SIG

In India, both the Galaxy M series and the Galaxy A line are Samsung’s response to Xiaomi. The latter’s value for money phones sell well in the country where Xiaomi is the most popular phone manufacturer. India is the world’s second-largest smartphone market; however, being a developing country, pricing is of great importance. During the second quarter, Samsung was third in the country after Xiaomi and Vivo after shipping 2.9 million phones from April through June. That was down 60% from the 7.3 million units it delivered during the same quarter last year.