Go to YouTube. Type in “Russ Anber magic.” Click on several of the videos that come up and you’ll see a guy with a deck of cards. Or maybe he’ll be manipulating three metal cups and some tiny balls.

“I’ve seen that guy before,” you might say to yourself. “Wasn’t he in Vasyl Lomachenko’s corner?”

Russ Anber was born in Montreal in 1961. When he was eleven, his family moved to a town called Sainte-Adele, fifty miles northwest of the city. His father ran a business that manufactured metal attachments for belts, motorcycle helmets, and sports equipment. His mother was a stay-at-home mom.

Anber was captivated by the boxing competition at the 1976 Montreal Olympics. The release of “Rocky” later that year further fueled his fire. Thus motivated, he embarked upon a shortlived amateur boxing career that consisted of three fights before the age of eighteen.

“It was nothing to brag about,” Russ recalls. “The first two fights were at 118 pounds, and I won a decision in both of them against the same opponent. The thrd fight was on short notice at 126 pounds. That one is a bad memory. I was a late replacement. I wasn’t ready and I was in over my head. They stopped it after the first round.”

That was the end of Amber’s sojourn as an active fighter. But he was hooked on boxing. He hung around. He made frends. At age eighteen, he worked Vinnie Curto’s corner when the Massachusetts middleweight decisioned Marciano Bernardi in Montreal.

Things flowed from there. Since then, Anber has worked as a trainer and cut-man. He has been behind the microphone as a TV commentator for the Canadian Broadcasting Corporation at six Olympic Games. In 2003, he founded Rival Boxing (a boxing equipment manufacturer). Until two years ago, he owned a gym. 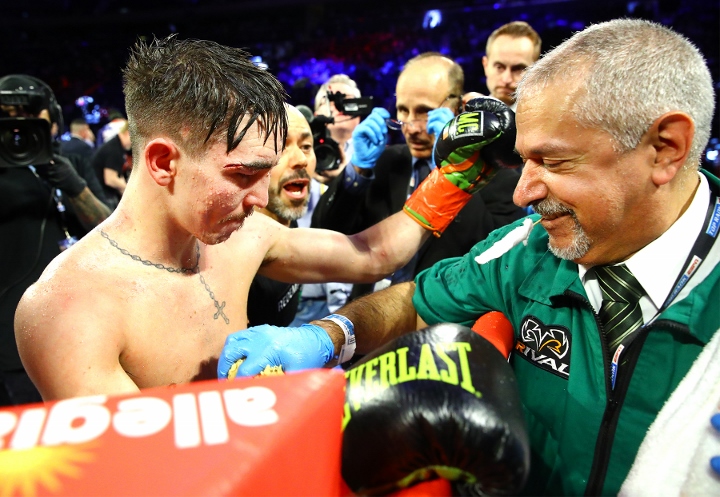 Anber grew up fluent in English (his first language) and French. He has developed a good working knowledge of Spanish. He considers himself an old-school trainer. His heroes are men like Eddie Futch, Ray Arcel, and Angelo Dundee. He prides himself on his ability to work with an amateur, build a foundation under him, and guide the fighter to world-class status, as he did with Otis Grant and David Lemieux. He has also carved out a niche for himself as one of the best hand-wrappers in boxing.

Wrapping a fighter’s hands is an art and a science. In boxing, as in many other athletic endeavors, specialization is now common. Many trainers no longer wrap hands or close cuts when they work a fight at the highest level. Anber learned to multi-task on his way up the ladder. His skills are very much in demand.

“The hand evolved as a grip, not a club,” Russ explains. “The smallest bones in the body are in your hand, and many of these bones are fragile. The key to a good handwrap is to protect the hand so the fighter can form a fist without straining and things are at just the right tension so everything is held in place without interfering with circulation in the hand.”

Magic is a universal language. Like boxing, it requires learning the mechanics of the craft, constant repetition, and dexterity with the hands. A magician’s hands are as important to him as a fighter’s hands are to the fighter.

“And each fighter and magician has his own personality,” Anber adds. “With the great ones, whether it’s boxing or magic, their personality comes out.”

How did he get involved with magic?

“I was fifteen,” Russ remembers. “And I got a job working in a sporting goods store as a ski technician. Another kid who got hired at the same time was working in the tennis department and started dabbling in magic. He agreed to show me how one of his tricks was done on the understanding that I’d practice it. We were two kids with a dream. I wanted to succeed in some way in boxing and he wanted to be a magician.”

“I’m not a great magician,” Anber acknowledges. “My repertoire is simple. Most of it is with a deck of cards. I also do cups and balls. I’m not a stage performer. I do tricks for the fighters I work with and friends.”

Who are the magicians that he admires most?

“The King has to be Dai Vernon,” Russ says. “And if I was going to put three more faces on the Mount Rushmore of Modern Magicians, it would be Frank Garcia, Harry Lorayne, and Paul Harris.”

What about Harry Houdini?

“Houdini performed card tricks, but he wasn’t particularly skilled at them,” Anber answers. “His claim to fame was as an escape artist, not a magician in the way we thnk of magicians today.”

Asked for more thoughts on magic, Russ volunteers, “The toughest audience I ever performed for was Vasily Lomachenko and his father. They had no interest in being entertained. No, let me correct that. Their entertainment was in trying to figure out how I did the tricks. That was all they wanted to do. A few times, they figured them out. But most of the time, they couldn’t.”

“And this might surprise you,” Anber adds. “Wladimir Klitschko is a very good amateur magician. He’s the best magician I know in boxing.”

So . . . If Anber had to choose between working the corner for a major championship fight or performing onstage in a major magic show, which would he choose?

“I’m not good enough to perform in a major magic show,” Russ answers. “So I’ll stick with what I do well and choose boxing.”

And by the way . . . The 14-year-old kid who worked with Anber at the sporting goods store and wanted to be a magician someday was named Alain Choquette. He’s now one of the most famous magicians in the world.

Muhammad Ali loved magic and fancied himself an amateur magician. One afternoon, we were at Tannen’s Magic Shop in midtown Manhattan. The shop was founded in 1925 and was the oldest continuously operating magic emporium in the United States. After a while, Lonnie Ali glanced at her watch and said, “Muhammad, it’s getting late. We’d better go now or we’ll have trouble getting a cab back to the hotel.”

“Don’t worry about it,” Ali told her. “The police will take care of it.”

So we stayed in the store until 5:30. Then we went out onto the street. As Lonnie had predicted, there were no cabs.

A passerby did a double-take. There was a request for an autograph. Several more people stopped. Soon there were twenty. And before long, more. The crowd spilled off of the sidewalk onto the street. Traffic was completelty blocked.

A police car arrived to see what the problem was. It didn’t take long for the officers to figure out that the only way to reopen the street was to put Ali in the police car and drive him back to his hotel.

“I told you,” Muhammad told Lonnie afterward. “I knew the police would take care of it.”