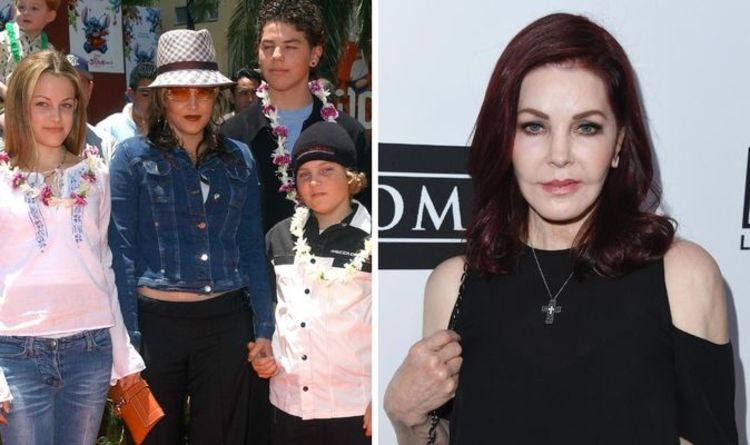 Priscilla and Elvis Presley had been long divorced when he died suddenly in 1977. Their daughter Lisa Marie was just nine-years-old, meaning The King would never have had the chance to meet his grandchildren. Priscilla, on the other hand, got the chance – but are they close?

Priscilla seems to be close to her grandchildren, given some of them have spent time living with her over the years.

In March 2017, Priscilla revealed her two youngest grandchildren, twins Harper and Finley, had been living in her care for around nine months.

From this time, Priscilla was inspired to write a kids’ books, which both kept the memory of her beloved ex-husband alive while paying tribute to her grandchildren.

She told People magazine in 2017: “I’ve learned to really listen to what [the girls are] saying.

“They have so much to contribute in their opinions, their viewpoints and questions. I value that very much.”

Priscilla’s book Elvis Presley’s Love Me Tender is a picture book featuring the lyrics of the King’s classic song as inspiration.

Speaking about the twins’ relationship with their deceased grandfather, Priscilla went on: “The twins know much about their grandfather.

“How famous he is, his love of Graceland, his movies and his songs.

“They can hear one of his songs on the radio and right away know that’s his voice.

“I can’t imagine them not liking the book. First of all, they will instantly recognise the title and secondly, it’s a feel-good story of love and accepting and a happy ending.”

She went on to add: “Isn’t that what children want?”

Sadly, Priscilla has also had to face the devastating loss of one of her grandchildren Benjamin Keough, who took his own life only two weeks ago at Lisa Marie’s home in California.

Priscilla posted a heartfelt tribute to her grandson, also speaking about how her grandchildren and daughter were coping with the loss.

She posted to Facebook: “These are some of the darkest days of my family’s life. The shock of losing Ben has been devastating.

“Trying to put all the pieces together of all the possible whys has penetrated my soul. Each day I wake up I pray it will get better.

“Then, I think of my daughter and the pain she is going through as she was a doting mother. Ben’s father, Danny, who is completely lost, as Ben was his only son.

“Riley [Benjamin’s elder sister], so loving and so close to him; Harper and Finley, who absolutely adored Ben.

“Navarone [Priscilla’s son with Marco Garibaldi], who struggles deeply with loss and death. Rest in Peace Ben, you were loved.”

Evidently, Priscilla’s relationship with her grandchildren will be closer than ever as the family tries to come to terms with the loss of Benjamin, who was just 27 when he died.

For confidential support call the Samaritans in the UK on 116 123 or visit a local Samaritans branch.