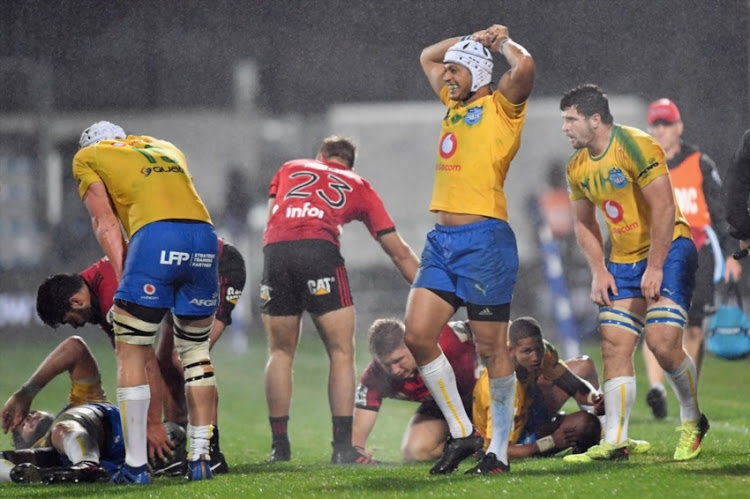 The IPA-drinking, man-bun-growing, 80$-slippers-wearing show that is Super Rugby has wrapped up week 6. There was some GOOD, plenty of SHIT and the blight that is the TMO continues to consume the tears of handicapped orphans to fuel its joy-killing doomsday machine. Business as usual.

Robert du Preez Sr. must have it out for me. His side seems intent on making my optimistic preview of them seem like the worst prediction since the Communist Manifesto. The return of prodigal son Jean-Luc du Preez should have been the impetus that finally kick-started the Sharks’ engine. Instead it sputtered, coughed up some black smoke and fell out of the car. Don’t let the Durban dumpster fire take away anything from the Rebels’ performance though. Their backline was firing on all cylinders and when the game opened up in the second half, even the forwards joined in with the fun. Hopefully for them Genia’s knee injury is not too serious.

The Stormers absolutely blitzed the Reds’ vaunted defence at the onset here, racing out to a 18-0 lead. The visitors almost pulled off a stunning comeback after Daugunu scored in the 78th minute though. They gather the restart, win a penalty, set up their lineout…. then lose the ball. Brad Thorn’s rage turns the coach’s box into a mix of boiler room and abattoir. Obviously a hugely important and untimely return to form for the Queenslanders, but they lost the match far before this moment. They simply gave away far too many penalties. It broke their momentum on attack and allowed the home side to dictate the flow of the game.

The Fucking TMO – Which I move to become the official title for this horrendously failed shithouse institute of the modern game. Full disclosure, I only watched two games this weekend, but in both the FTMO shat the bed. First a clear try was disallowed for the Sharks; even the Aussie commentators thought it was ridiculous. Then, the TMO failed to flag a serious incident with Taniela Tupou, which should have led to a card. And off course every ten passes leading up to a score must be examined at least 25 times from 10 different angles in order to spot proof that the moon landing was staged. My grandfather once called me while I was having “quality time” with the missus and yet I consider the TMO the greatest single way to ruin an otherwise lovely 80 minutes.

Jack Goodhue – Proof that not all modern centres have forgotten how to run lines. The outside centre crashed through a prop and a number eight for his first try, then cut a beautiful line to score under the posts for his second. Wonderfully underappreciated player.

Damian Willemse – It’s not like the Reds made it very hard for him, but the teenager showed off his excellent game management on Saturday. He’s got the hands, feet and vision to be a very successful pivot at this level and maybe beyond.

Competitive conferences – Following their loss against the ‘Canes, the Highlanders dropped from first to fourth in their conference. Last year’s bottom team, the Rebels, proudly top the overall log. In the South African conference meanwhile, the Jaguares picked up only their second win of the campaign against conference leaders and last year’s finalists the Lions. Not everyone will have been happy with jettisoning three teams, but it has undoubtedly improved competitiveness.